The term “epigenetics” means “on top of conventional genetics”. Epigenetic modifications refer to the heritable regulation of gene expression that occur in absence of changes in DNA sequences.  A variety of molecular mechanisms are involved in epigenetic regulation of gene expression and chromosomal stability, including DNA methylation, histone modifications and non-coding RNA. These different layers of epigenetic mechanisms have been shown to regulate normal cellular differentiation and define cellular identity. They function at the interface of genetic and environmental risk factors and are implicated in the etiology of many complex diseases. The early life of mammals, including in utero and early postnatal periods, is the most epigenetically dynamic, and therefore the most sensitive to long-lived epigenetic alterations and adaptations that occur following environmental exposures. 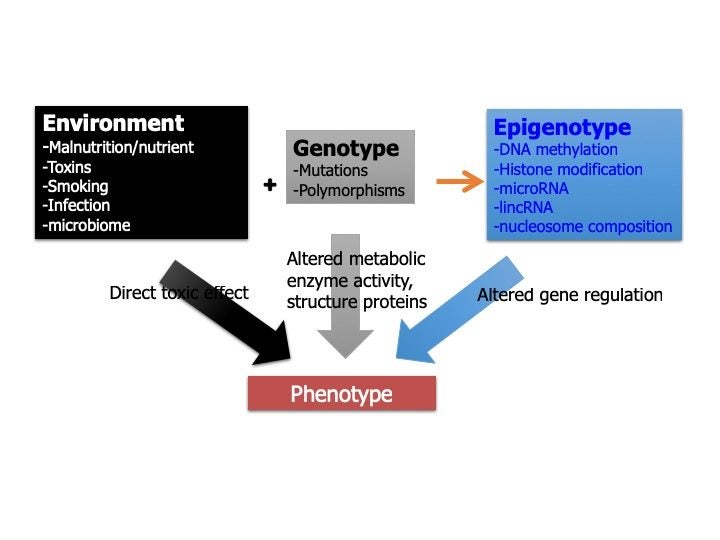 DNA methylation is one of the most common epigenetic mechanisms that regulate gene function. Methylation of DNA refers to the addition a methyl group at 5’ position of cytosine to generate methylcytosine (5mC) and this processed is done by different DNA methyl-transferases in mammalian species. DNMT1 adds methyl groups to hemi-methylated parent-daughter duplexes during DNA replication, while two other methylases, DNMT3a and 3b are responsible to add methyl groups de novo to DNA. 5mC binding proteins, such as methyl-DNA binding proteins (MBD1-3) and methyl-CpG binding protein 2 (MeCP2), interact with histone modification enzymes to influence chromatin and regulate gene expression. Ten-eleven Translocation (TET) proteins are responsible for removal for 5-methyl by generating the oxidative intermediates (5’-hydroxymethyl-cytosine or 5hmC, 5’-formyl-cytosine or 5fC, and 5’-carboxyl-cytosine or 5caC). 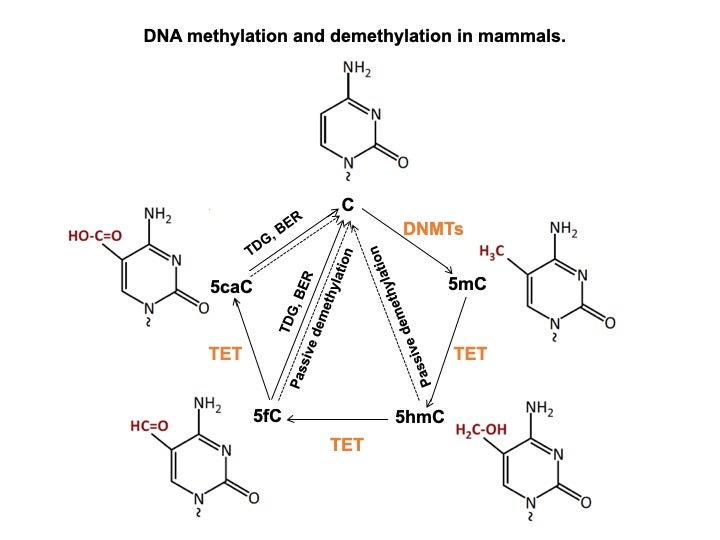 Depending on the location it occurs, DNA methylation modification either negatively or positively correlates with levels of gene expression. DNA methylation has been known to regulate transcription factor (TF) binding, controls alternative splicing and enhancer activity. Mechanisms accounting for regulation of gene function by DNA methylation also vary based on the position of DNA methylation within the gene (promoter, enhancer, intron and others), through directly alter the binding of protein (often transcriptional factors or TFs) to functional gene elements, or through proteins binding to DNA methylation, such as MBD1-3 and MeCP2. Recently, proteins with preferential binding to 5hmC, 5fC or 5caC have been identified, and they function as possible ‘readers’ of these modifications to cause downstream phenotypic consequences.